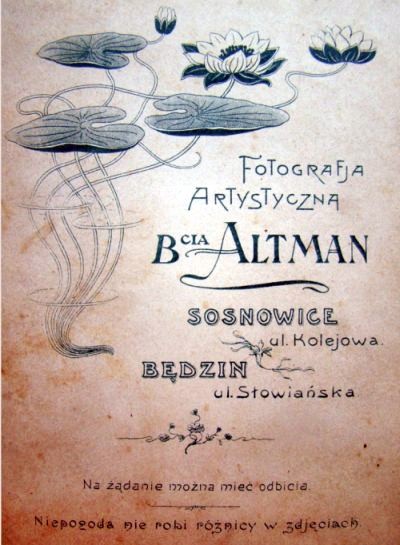 The brothers Stanislaw and Bronislaw Altman were the most famous photographers in the Dąbrowa Basin in mid-war period, they were called „masters of light”. The renowned company Art Photography „Altman Brothers” was established in 1898 in So-snowice and operated until World War II. Their photography studios were also located in Bedzin in Słowiańska Street (Malachowskiego) and in Dąbrowa Górnicza. Their atelier was famous for many artistic photographs of the cities of the region, reprinted on postcards in the 20s of the twentieth century. Bronislaw ran a studio in Bedzin and also lived here.

Rachmiel Shalom (Stanislaw) and Berek (Bronislaw) were born in Czestochowa as sons of David and Gitla. They are buried in the Jewish cemetery in Sosnowiec. Together with their families they perished in the gas chambers of KL Auschwitz-Birkenau. Stanisław’s children, Gustav and Esther Zuckerman, survived the Holocaust and after the war they settled in Antwerp.