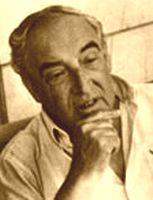 He grew up in wealthy merchant family in Poland and Germany. In 1936 he immigrated to Palestine to study English and mathematics at the Hebrew University. However he earned his degree from history. In 1947 he became a lecturer at the Hebrew University. He became deputy dean of the Faculty of Humanities from 1953–55, was made professor and chair of medieval history in 1958, was dean of the Faculty of Humanities from 1962–66, and served as prorector at the university in the years 1975-78. He was a brilliant and charismatic lecturer, who was often invited to give lectures abroad. He specialized in the history of the Crusades and the Kingdom of Jerusalem and wrote many books on the topic. He was the chief editor of the Encyclopaedia Hebraica (1967).

He was the main reformer of the Israeli educational system. He participated in the organization of Ben-Gurion University of the Negev (1969) and the University of Haifa, where he became the first dean. In 1969 he received the Israel Prize in the humanities and an honorary doctorate from the University of Montpellier.