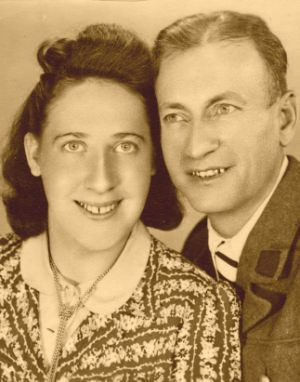 He was a brother of Zelig and Rivka Perla Goldcwajgowa, the wife of a photographer Josef Goldcwajg. In the interwar period he worked as a professional photographer. After the establishment of the ghetto in Będzin in a partnership with his brother-in-law, Josef Goldcwajg (1891-1943), they became the official photographers of the ghetto. Their job was to take identity pictures of the inhabitants of the ghetto. Wolf later went into hiding, but was betrayed by a Pole and sent to Auschwitz. He survived the war and immediately after the liberation, he joined the Polish military police in the hope of revenge on the Germans. When working near the border of Czechoslovakia in the spring of 1946 he met Helena Sztelman (1923-2010) from the Slovak city Zvolen, whom he married in Katowice, Poland on 16. May 1947. Later they immigrated to the US and lived in Baltimore.

In the photo with his wife.