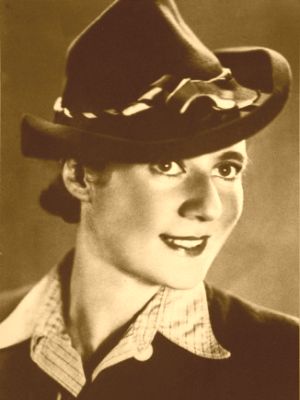 After the Nazi invasion she was ordered to appear on 28. October 1940 at the railway station Sosnowiec, where she took care of 16-year-old Sala Garncarz from Sosnowiec. Their friendship is described by Sala’s daughter – Ann Kirschner in the book „ Sala’s Gift: My Mother’s Holocaust Story „(USA 2006, Poland 2008). In a camp in Geppersdorf (Rzędziwojowie) to which she was sent, Ala received a job in the office. After her release in 1941 she worked in offices and workshops run by Moses Merin.

After the liquidation of the ghettos in Będzin and Sosnowiec in August 1943 she was deported to KL Auschwitz, where she worked in warehouses, sorting things confiscated from the prisoners, then in a Union Werke munitions factory. There Roza Robot of the camp resistance movement recruited her to help prepare the uprising. Along with other women she smuggled gunpowder from the factory for Sonderkommando members who on 7. October 1944 blew up Crematorium IV and incited rebellion. For her participation in the action she and three other women were publicly hanged in the women’s camp of Auschwitz.