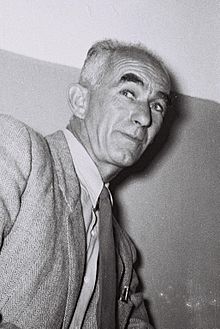 After graduating in 1921 Isser Birencwajg emigrated to Palestine, where he worked in a kibbutz. Be’eri was one of a group of young men known as the „Six from Bedzin”, who were later the founders of the Migdal colony. From 1925 he worked in construction in Haifa but in 1938 he went bankrupt and returned to Poland for a few years. When he left again Be’eri joined the Haganah in 1938 and was in its work battalions, before becoming commander of the Kfar Giladi region. Between 1944 and 1945 he managed Israel Military Industries, and from 1946 to 1947 managed the Na’aman factory. In 1947 he joined Shai, and in February 1948 was appointed its head.

On 30 June 1948 Shai was disbanded as part of a reorganization of the Israeli secret service. Three agencies were created: Shin Bet (Shabak), Mossad and Military Intelligence Directorate, with Be’eri appointed the Director of the latter.

On 30 June 1948, he accused Captain Tobianski of being a Jordanian spy who was then was taken into custody and interrogated during a drumhead court-martial. Be’eri had already prepared a firing squad. Tobianski was found guilty and executed in Bayt Jiz, where his body was buried. Tobianski had received neither a lawyer nor a right to appeal, and his case was not reviewed by a higher court. Be’eri knew of his innocence, but still ordered his execution.

Following Tobianski’s posthumous rehabilitation, Be’eri was forced to resign as chief of military intelligence. In November 1949 Isser Be’eri stood trial in the Tel Aviv for Tobianski’s wrongful execution. He was found guilty of manslaughter and given a symbolic punishment of one day of prison, „from sunrise to sunset, 30 days after sentencing”, before which he was pardoned by the president, Chaim Weizmann. Be’eri reportedly left the trial a broken man and ensconced himself in his home until his fatal heart attack in January 1958.