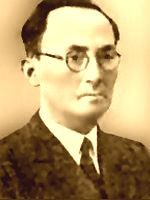 In the years 1923-1928 he was the headmaster of the Jewish Jawne Gymnasium in Będzin at Kołłątaja Street 45 and taught there Latin. Then until the war broke out, he had been the headmaster of an all-girls Jewish gymnasium in Sosnowiec. He was also active in the social life of the city. He led the Winter Aid Department at the Head Office of the Jewish Councils of Elders in Sosnowiec, established on 15. October 1940. As part of the project potatoes, as well as clothing and shoes collected from residents of the Basin were distributed among the poor.

In 1943 his family was relocated to the ghetto in Środula (Siedlerzeile 18). His wife and son Benedict died in Auschwitz at the beginning of August 1943. Widerman was hiding in a „bunker” in Środula. His story was presented in the Polish-language novel “The Blonde Beast” published in Munich, in 1948 (the title refers to Reinhard Heydrich, chief of the Reich Security Main Office, persecutor of the Jews)