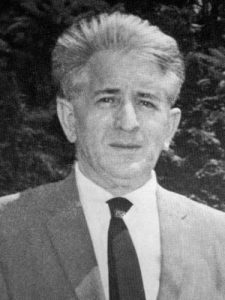 born 25. February 1895, Będzin
died May 1970, New York
lived in Będzin / Warsaw / Israel / New York
neurologist and psychiatrist, one of the leaders of the Warsaw Ghetto Uprising

He was a neurologist and psychiatrist, working in Warsaw. In the interwar period he was the president of the Polish Zionist Party, Organization of Revisionist and a member of the right-wing Jewish organization Ha-Zohar. According to some he was one of the founders, and most likely the chairman of the Jewish Military Union and a participant and one of the real leaders of the uprising in the Warsaw ghetto. He was probably the last commander of the uprising on behalf of the Jewish Military Union and one of the two (with Marek Edelman from the Jewish Combat Organization) who survived the war.

After the war, he immigrated to Israel, and later moved to New York and lived in Manhattan. In 1963 memoirs of David Wdowinski “And we are not save” were published in New York. In the book he presented the involvement of the Jewish Military Union in the uprising in the Warsaw Ghetto.