Prof. Jacek Leociak once said – people who discover collections of previously unknown photographs become “accoucheuse of memory”. Photography preserve images, gestures, style and mood of people portrayed. Photographic paper is more durable than life.
The book entitled “Jewish Żarki. Lost photographs” was released in December 2016 and since then it “lives on its own”. When we were publishing this unique, collection of photographs by Polish photographer Jósef Bacior, we had identified only one of the portrayed people – Mordechai Weinryb. Today, thanks to the internet, we have learned the names and stories of a few more people from this wonderful collection. One of our main goals with this book was to restore the identity of the people photographed by Bacior so now we can proudly share our findings – stories of people discovered after so many years:

1. Motek (Mordechaj) Weinryb (8 page in the book) – was born on June 26, 1922 in Żarki. As a fifteen-year-old he joined the Zionist organization Ha-Szomer Ha-Cair.
He was a Holocaust survivor. He managed to visite his hometown Żarki, where he likely to talked about his childhood and how he beloved this place on earth. He passed away on October 5, 2011 in Berlin. 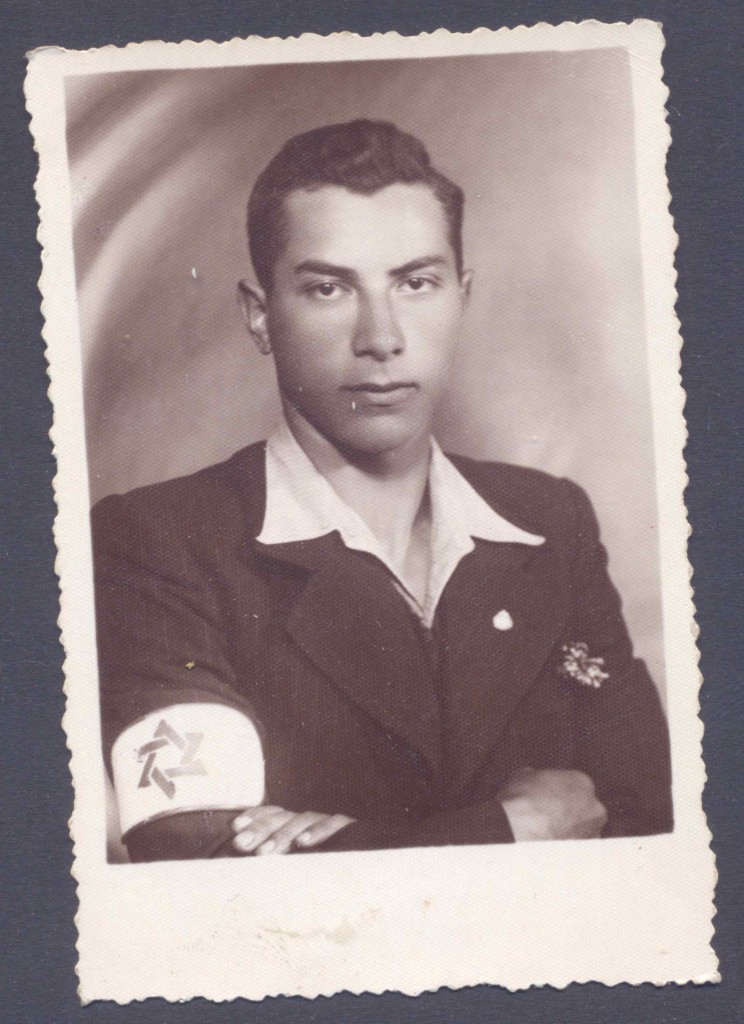 2. Zofia and Samuel Bornstein (Bornstzen) (p. 153 in the book) – were identified by Michael Bornstein – the son of Zofia and the brother of Samuel, with whom he lived on ul. Sosnowa steet in Żarki before the War. Michael Bornstein was born in Żarki in 1940. In 1945 he and his grandmother Dora were among other surivors during the “liberation” of Auschwitz-Birkenau. His brother – Samuel (pictured in 1939, 4 years old) and his father were murdered in the Holocaust. His mother (Zofia, pictured) survived in a labor camp. In April 2017, Michael with his daughter Debbie, published the book entiteld “The Surviviors Club” – about the story of the Bornstein family. On the cover of the book is a famous photo of children showing arms with a tatooed camp numbers. This photograph was taken at the moment of the “liberation” of Auschwitz. Michael is one of the children who pull their little arms to the lens … 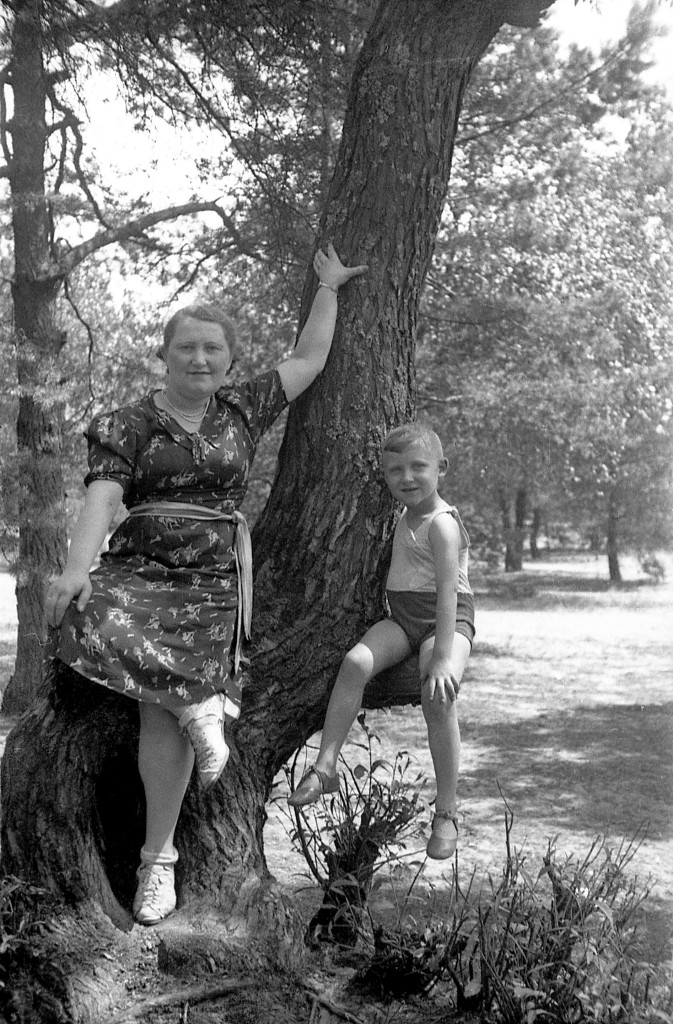 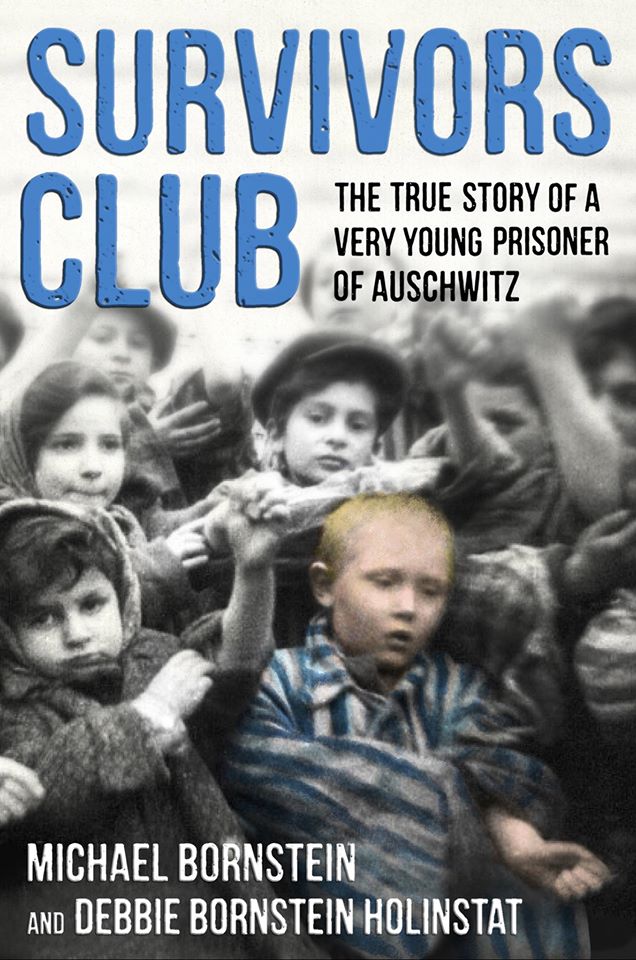 3. Rose Pojzner or Pozner (page 150 in the book) – was recognized the mr Henryk Rakowski.
We are not sure if her surname was Pojzner or Pozner. but we know that she lived on Poprzeczna street in Żarki. She had two twin brothers – Szmul and “Dudek”.
The Rose Brothers worked in a sodal factory (?) in Żarki, owned by the father of Henryk Rakowski. Szmul did not survive the war – he had a “very Jewish look”, while Dudek survived, perhaps because he had a more “Aryan look”. Dudek worked in the ammunition factory during the war, after the war he left for Israel. Mr. Rakowski even had a contact with him for a while…
Rose Pojzner from the photo perished in the Holocaust and her family home in Żarki no longer exist. 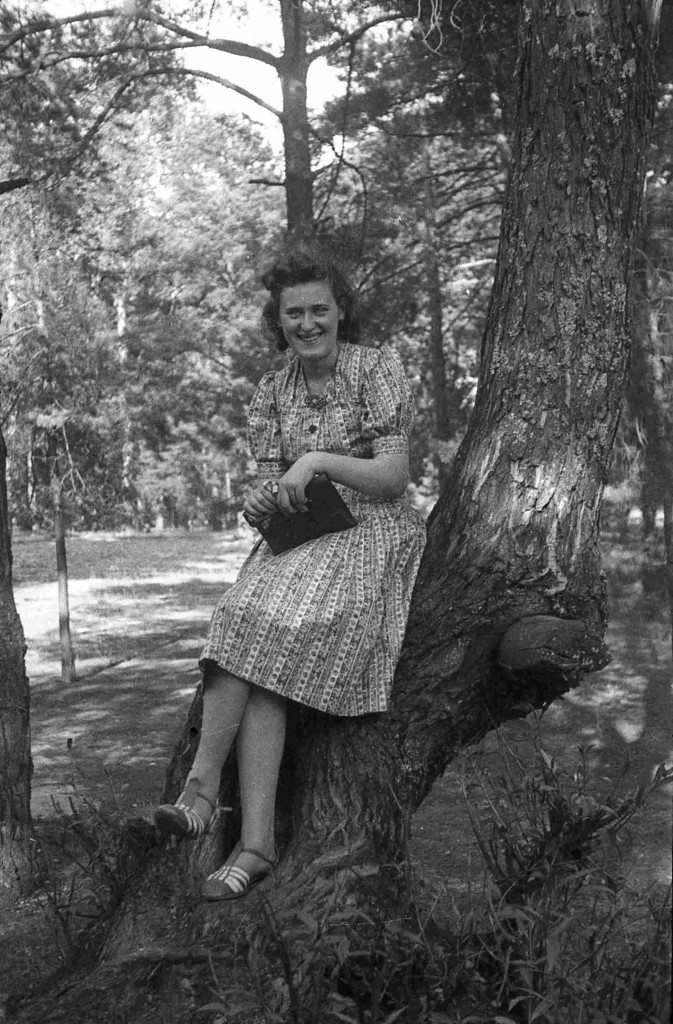 4. Stanislaw Starostecki and his daughter Marianna (pages 172-173 in the book).
– were identified by mr Alojzy Zieliński, a member of the city hall in Żarki.
Mr Stanisław Starostecki was a non-Jew whos came to Żarki from a village Kobiele Wielkie near Radomsko. He was a miller. He lived in Żarki until the 1950s, and then he moved to Warsaw. On the beautiful photographs of Józef Bacior, Stanislaw is portrayed with his daughter Marianna (born in 1934), daughter of Anna nee Szczebura. Marianna passed away in Izabelin in 2001. Pictures were taken at the pond next to the Olesiow mill. According to Wojciech Mszyca the building behind Stanisław and Marianna is probably the Olesiow mill. 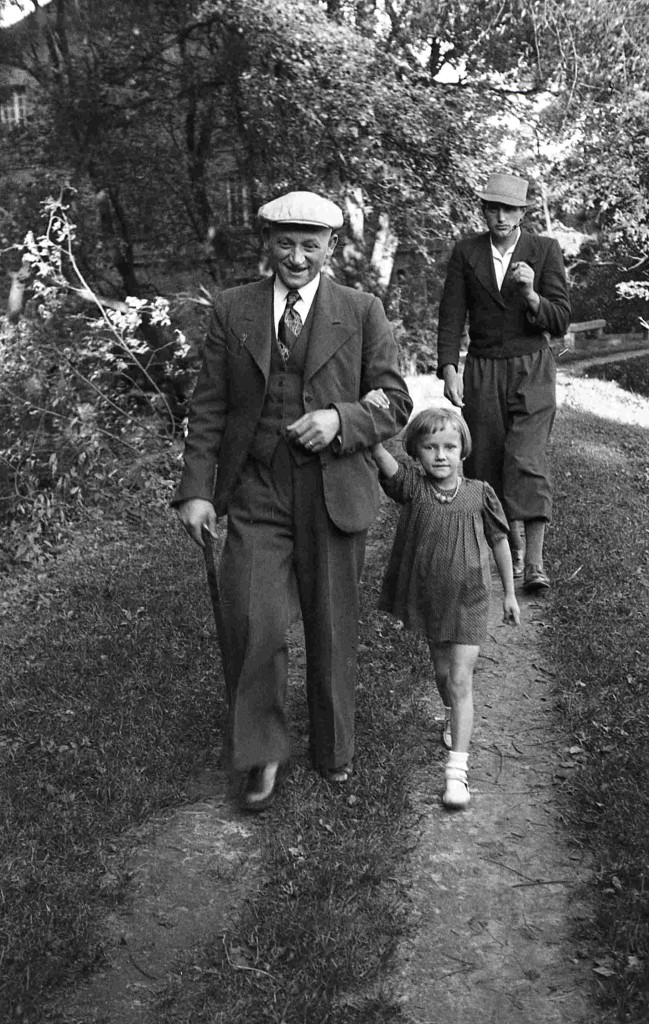 5. Cecylia Grzybek (pages 70-71 in the book) – the girl on the left in a patterned dress. Cecilia was identified by Leokadia Grzybek for whom Cecylia was an aunt. Cecylia was born in 1916 and she had 3 sisters. She married Mrs. Podsiadlik and had 2 sons.
Before the war at the main square of Żarki she was running tearoom “Chrześcijańska Cherbacianka” (“Christian Tearoom”) which is pictured on the photograph. During the the war the bussines was probably changed into a shop with vegetables. Cecylia passed away in 1946 and orphaned 2 sons. One was half a year and second was 3 years old.
Mr. Wiesław Podsiadlik wrote to us after he got information from his cousin (?) Mrs Leocadia that we have a some photographs from Żarki and his mother is on of them. He wrote a very moving letter asking us for a copy of the book to see the images of his mother for the very first time! Mr. Wiesław was 3 years old when his mother, Cecylia Grzybek passed away. After receiving the book, he was wery grateful and gave a copies of the book to his daughters to see and remember how their grandmother looked. 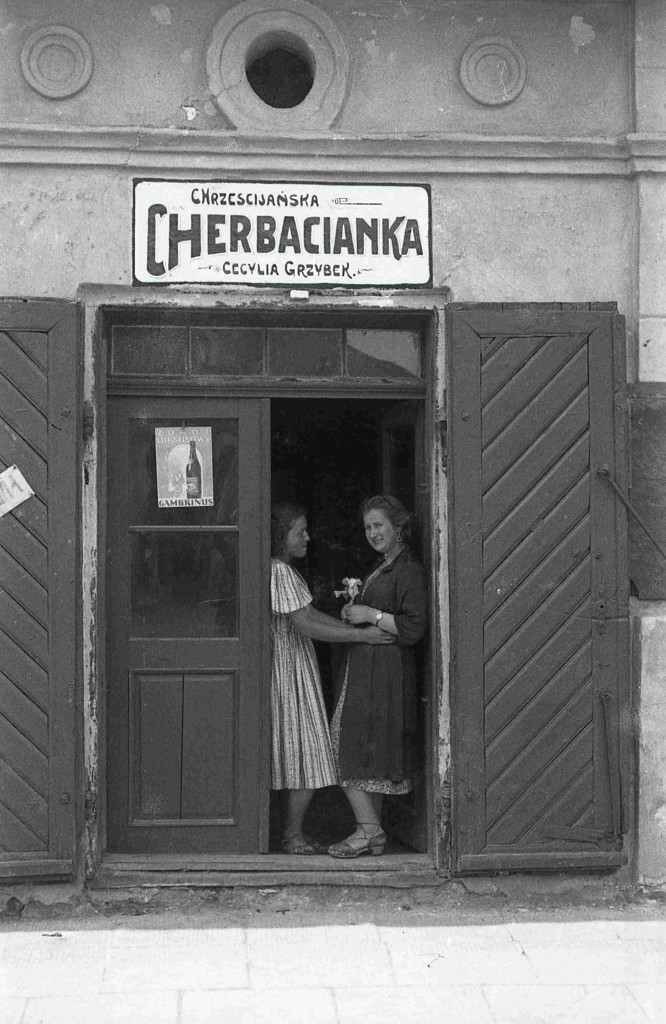 6. Berel Lemel (p. 32 In the book) – stands in the front row from the left (with a pickaxe in hand)
Identification on the basis of similarity with another photograph from Leokadia Silverstein’s book “That’s Right” (Jewish Historical Institute, Warsaw 2002, p. 52).
Berel Lemel was born in Żarki in 1924. According to the author of the book after expulsion Jews from Żareki he lived in the ghetto in Pilica, then in the ghetto in Radomsko and Częstochowa, which in 1943 left to join the guerrilla in the forests of Koniecpol. Berel was shot dead by the Nazis. It was issued by a Jewish Gestapo agent. 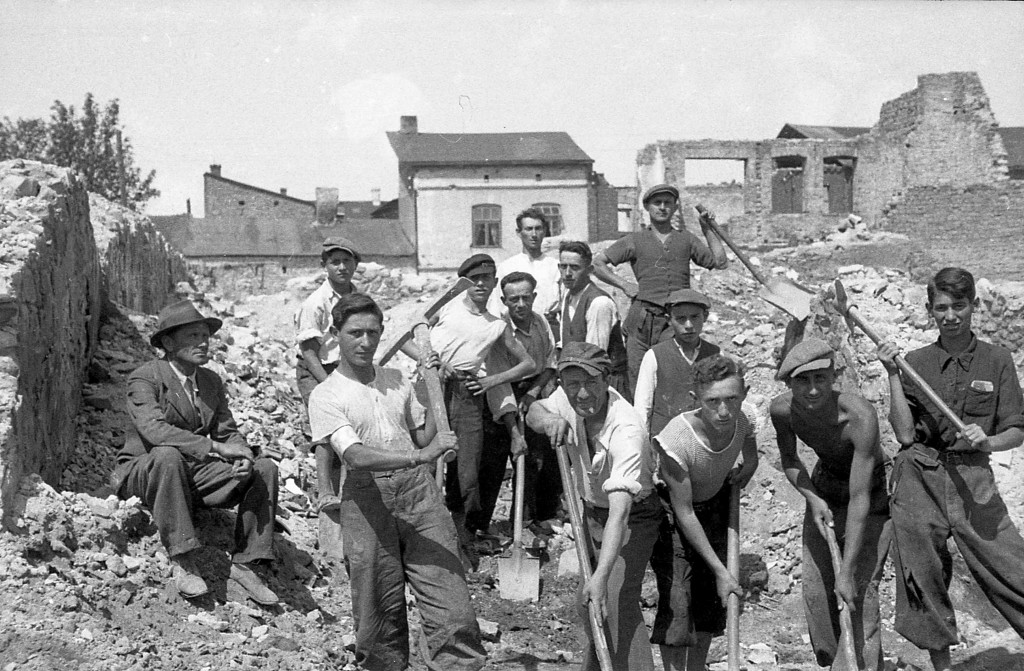