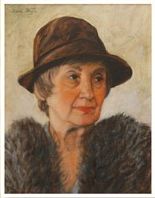 During the liquidation of the Będzin ghetto by the Germans (August 1943) she was hiding for a week in a so-called “bunker”. Her 5-year-old daughter Mirusia (Dr. Mira Reyman Binford) was given to Polish family. She survived two winters (1943-1945) in Auschwitz.

She was reunited with her husband Moses Rembiszewski (Mark Reyman) and their daughter Mira, and after four years of waiting in Munich Germany, they were finally allowed to immigrate to the United States in 1949. Living in New York, for the first ten years she worked long hours in factories, doing piecework until she was promoted to forelady. She lived in New York, Florida and Hamden.

She did not begin painting until she was in her 60s. She taught herself to draw and paint by studying art books and reproductions and copying them, and taking a few classes in life drawing. In 2012, at the Jewish Community Center Greater New Haven she presented her oil paintings and watercolors as a 97-year-old painter – witness of history. Paintings depicted scenes of Jewish life in pre-war Poland as well as charcoal drawings of family members who perished in the Holocaust and it progressed to portraits, landscapes and still life paintings in oil and watercolor that depict life reclaimed and re-imagined. She is also an author of memoirs about her survival.

In 2018, the Brama Cukermana foundation translated from English and published Dora’s memoirs entitled “Hob betuchen! Have hope! Memoirs of Dora Reym from the time of the Holocaust ”. Dora’s daughter Mira Binford is an editor of the publication.