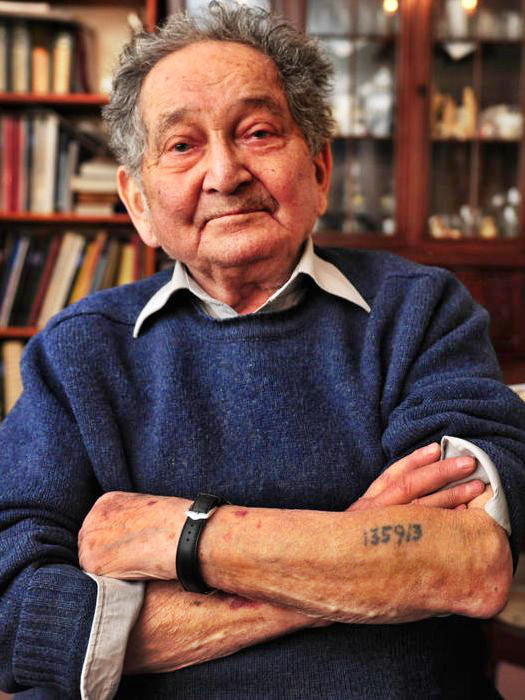 born 1. September 1926, Będzin
died 30 August 2017, London
lived in Będzin, ul. Modrzejowska 77 (at present no. 81) / London
prisoner of concentration camps, author of a book “Survivor – Auschwitz, The Death March and My Fight for Freedom”

Szlamek Piwnik, after finishing cheder, in 1933 went to Rapaport school, and after classes he studied Jewish religion and Hebrew. During the war he worked as a horse caretaker, and then in a furniture factory. On 6. August 1943 the Piwnik family was deported to Birkenau (most were killed in gas chambers). After two weeks, he was assigned to work at the station, unloading trains with prisoners. After recovering from typhoid he was sent to the Fürstengrube mine in Wesoła.

On 19. January 1945 the camp was evacuated to KL Dora-Mittelbau in Thuringia (Death March), where he worked for three months on the construction site of an underground munitions factory. Then he was evacuated by river barge to Holstein, where he was sent to work on a farm. On 3. May 1945 the prisoners were loaded in Neustadt onto a cruise ship Cap Arcona, which along with another ship, was sunk during bombing by allied fighters (of approx. 7,000 prisoners no more than 500 survived).

After the war he settled in London. He wrote about his wartime experiences in a book “Survivor – Auschwitz, The Death March and My Fight for Freedom”