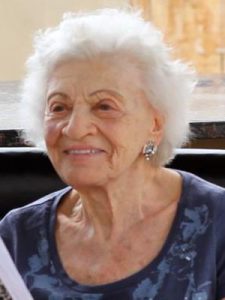 Jackie Szpigelman attended Fürstenberg Gymnasium in Będzin. As a member of the Zionist organization Hanoar Hacijoni in May 1943 she was sent from Będzin ghetto to Krakow in search of weapons. She participated in smuggling weapons into the ghetto. She survived the occupation on Aryan papers.

She is the co-author of the book “Stolen Youth: Five Women’s Survival in the Holocaust”, published by Yad Vashem in 2005. She describes her story of a young woman who survived imprisonment by both Nazi and Soviet. At 17 she was a member of the resistance movement in the Będzin ghetto. In August 1943, her family was deported to Auschwitz, and she ran away to Slovakia (where she met her future husband). Soviet partisans took her to Moscow, where she was to be honored as a hero, but instead was imprisoned in the Lubyanka and never saw her husband. In prison, she gave birth to a son – both miraculously survived. In 1948 she was deported to Poland. Later she settled in the United States (Arizona); in 1951 she married Richard Leo Lipski.