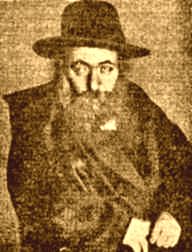 He was one of the most prominent rabbis in Poland, from the title of his work called „Imrei Emet”. He was one of the leaders of Agudat Israel and a member of the Council of Torah Sages. His comments and refelections were often printed in Orthodox books and magazines.

He married 17-year-old Fajga, the daughter of the Rabbi of Gur, Lejbuś Alter. In winter 1924 he, his brother – Abraham Mordechai Alter – the fourth Rebbe of Gur and the Rabbi of Sokołów, Yitzhak Zelig Morgenstern, took a 6-week tour of Erec Israel as members of a delegation investigating the situation of the local community there. He went there again in 1927.

In the years 1921-1935 he was the rabbi of Będzin . He became famous when he sent a surprising request to the city authorities: he wanted a bronze monument in honor of fallen soldiers (which was right in front of his windows) to be removed – because it depicted a half-naked woman which he claimed to be disturbing his prayers. He was buried in an ohel in the Będzin-Czeladź cemetery, but on November 27, 1979 his remains were moved to the Mount of Olives. His sons were also rabbis: Mendel in Będzin, and Yitzhak Meir Levin (1893-1971) was the leader of „Agudat Israel”.