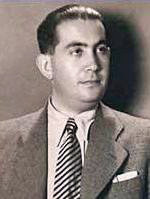 Jakub Laskier was the son of David, a co-owner of a mill. In 1917 he went to Palestine, but after a few years became ill with typhoid and returned to Poland. After the wedding (1925) with his wife Dwojra Hampel they went to Gdansk, where he worked as a bank clerk. There, in 1929, his wife gave birth to a daughter Rutka and they soon returned to Będzin. At the end of 1942 the Laskiers were relocated to the ghetto in Warpie, and in early August were deported to Birkenau. There, Jakub was separated from his family, and in 1944 he was transferred to Sachsenhausen. In the top-secret commando within so called „Operation Bernhardt” he was forced to counterfeit British currency, which was supposed to destroy the economy of Great Britain (2007 Oscar-winning film „The Counterfeiters” was based on this history).

On 13. April 1945, he was released and went to Palestine. There he married a pharmacist Chana Winer, with whom he had a daughter Zahavę (who up to the age of 14 knew nothing about her half-sister Rutka). In 2008, Dr. Zahava Scherz came to Będzin to take part in the shooting of a British documentary about Rutka.