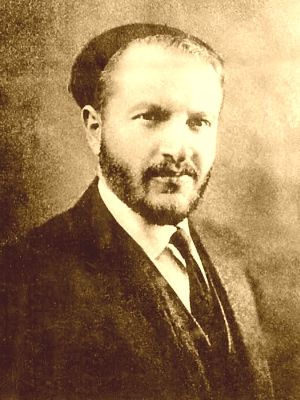 He was the son of a Rabbi of Będzin Issachar Berish Graubart and his second wife Dwora Necha and a brother of, among others, Rella Guttman – sculptor, Benjamin – social activist, David Zelig – teacher and Roza Jakubowicz from Kalisz – poetess writing in Yiddish.

As a rabbi in Bedzin he headed the Society for Aid to Poor Sick Jews „Linas Hacedek”. After the death of his father, December 30, 1913 he won the election for the rabbi of Będzin, getting more votes than the rabbi Bornsztajn of Wyszogród, supported by the Hasidim from Sochaczew. However, due to complaints to the authorities that the new rabbi was too young, the governor annulled the elections. During the re-election on June 20, 1914 he again received most votes and finally was elected a rabbi.

In 1920 he emigrated to the United States with his wife Anna and daughters, where in the 30s he became a rabbi in Brooklyn, New York. He was active in the Joint Distribution, the American Jewish Congress and the Union of Orthodox Rabbis.