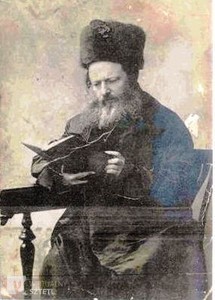 In Szreńsk in Mazovia Berisz graduated from a yeshiva and was appointed as a rabbi of Płock. In 1863 he married a daughter of a local dayan, rabbi Aszer Globus. His most famous apprentice was Nahum Sokolow, later the chairman of the World Zionist Organization. On 2. September 1893 Berisz became the rabbi of Będzin and the chairman of the community. Previously he had been a rabbi in Siedlce, before his family settled in Będzin.

He was a man of extraordinary wisdom and knowledge as well as of simplicity and modesty; he expressed great love and empathy towards an average simple Jew. He was one of the most respected rabbis both in Poland as well as abroad. In the rabbi world he was known as gaon – a scholar who was an authority when someone had questions concerning Jewish law. Most part of his explanations was published in 1910 book “Divrey Issachar”.

In 1912 he took part in a founding conference of the Agudat Yisrael movement in Katowice. In 1961 his remains