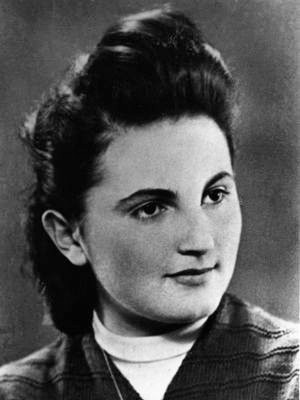 Chana Brajndla Granek attended Fürstenberg High School in Będzin. In the early years of the German occupation she and her father worked in a Michatz’ clothing workshop sewing uniforms for the German army. In April 1942, the SS arrested her father, who then was shot. Soon Hanka’s mother and brother were deported to Auschwitz, where they died. On 22. June 1943 Hanka was sent to a labor camp Graditz in Saxony. In January the following year she was transferred to the camp Peterswaldau (Pieszyce), Lower Silesia, where she remained until liberation.

After the war he lived in Munich, where on 3 November 1946 she married Wolf Erlich from Będzin (1918-2010). 5 years later they emigrated to the United States, where for a decade Hank worked on his own chicken farm in Mays Landing near Atlantic City, and then in the furniture industry. Together with her husband she travelled the world, also returning to Auschwitz. On 15. April 2012 at the Sara and Sam Schöffer Holocaust Resource Center in Galloway Township, an exhibition of her memorabilia was opened.