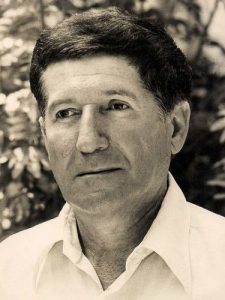 He graduated from the Fürstenberg Gymnasium in Bedzin. During World War II he served in the Red Army and was wounded in Kiev. In the years 1946-1949 he was in command of the youth organization Hashomer Hatzai Between 1947 and 1949 in Germany he was an editor of the newspaper for Displaced Persons camps, then a director of the UNWRA agency for the refugee children.

In 1949 he immigrated to Israel and worked in Haifa as a truck driver. In May of 1951 he fought in the battle of Tel Mutila. Between 1950 and 1953 he was the secretary of the municipal board in Nesher near Haifa, in 1957 he became a treasurer of Be’er Sheba. Between 1963 and 65 as a representative of the Zionist Jewish Agency for Israel (JAFI) he was an emissary in Brazil. From 1968 to 1976, he served as political secretary of the party Mapai. In June 1977 he was elected to parliament as a representative of the party Ma’arach. Again in 1981 he became a member of the Knesset, he became its deputy speaker and a member of the Finance Committee. He was also active in the Yad Vashem Institute and headed the publishing house in Yiddish „Israel Buch”.