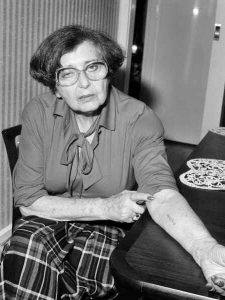 Henrietta Szpigelman graduated from the Fürstenberg Gymnasium. During the war she sewed winter uniforms for German soldiers in a Rossner’s “workshop”. Alfred Rossner used his influence to prevent the deportations of his employees. He was hanged by the Nazis in 1944. Based on the statement of Kitia Altman he was awarded a Righteous Among the Nations medal in 1995. Also, in 1982, on her motion, the medal was awarded to Genia Pająk, who hid Kitia’s 8-year-old cousin, Marysia Cygler (Tamar Dror) (in 1999 she published her memoirs “Green Parrot”).

In August 1943, her parents were sent to a labor camp Annaberg, and Kitia had to stay cleaning up the ghetto. In June 1944 she was sent to Annaberg, in July to Auschwitz and in October to Ravensbrück. She then worked in an underground ammunition factory, from where, on 10. April 1945 she was evacuated. The Red Cross sent her to Malmö (Sweden), from where she moved to Paris. In July 1947, together with her husband she immigrated to Australia, where she worked in the clothing sector. She was a volunteer guide at Elsternwick’s Holocaust Museum. In 2003 she published a book “Memories of Ordinary People”.